Egads, what a terrible headline, huh?

I should be ashamed of myself for using it, but it’s true. My dog is dying. Just as we all are. Every second after we are born brings us closer to our eventual last moment.

Alby (full name: Albert Fucking-Einstein) is around 17 years old. We are not exactly sure of his age because we got him from the pound. We’ve had him for 16 years and he hasn’t gotten any bigger, so we figure he’s somewhere around 17. But he could be older.

Yup. You read that right. In human-equivalent years, he’s around 100 years old.

And he is finally starting to show it.

He has lost a bit of his hearing. I don’t call or whistle for him anymore because it just doesn’t work. I’m developing a habit of walking back to get him when he goes astray or I walk him on a leash.

His eyes have clouded over probably due to cataract formation so he’s going a little blind, too. He bumps into me on our pre-dawn walks and movement close to him scares him more than usual. Honestly, I haven’t asked our dog’s veterinarian to check his eyes out. That would cost more money. We’ve already spent over $5,000 on him in the past year and a half, we are not doing anything more unless it is necessary.

Now you see it 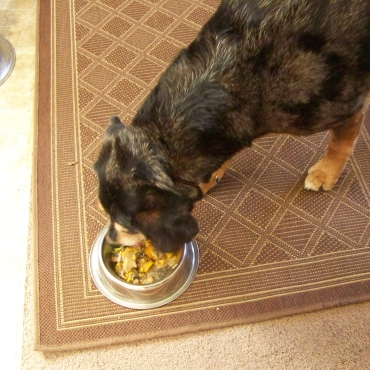 A few years ago, I started a blog for Ably. The idea was to write like it was Alby’s diary. He was going to spill it all. But I took on more than I could chew with that project and I abandoned it soon after. But now that Alby has turned to his final years, I may revive it.